Formed in 1986, the Burgess Hill Marching Youth is a Light Infantry style Bugle and Brass band renowned for its distinctive green and white Ghurkha inspired uniform. The members of BHMY are primarily from Burgess Hill, though the band does attract and keep members from further afield.

BHMY currently consists of 50+ regular members who meet to rehearse for 2-4 hours per week. These members also take part in the performances such as contests, fetes, bonfire processions, massed band events and annual residential trips. 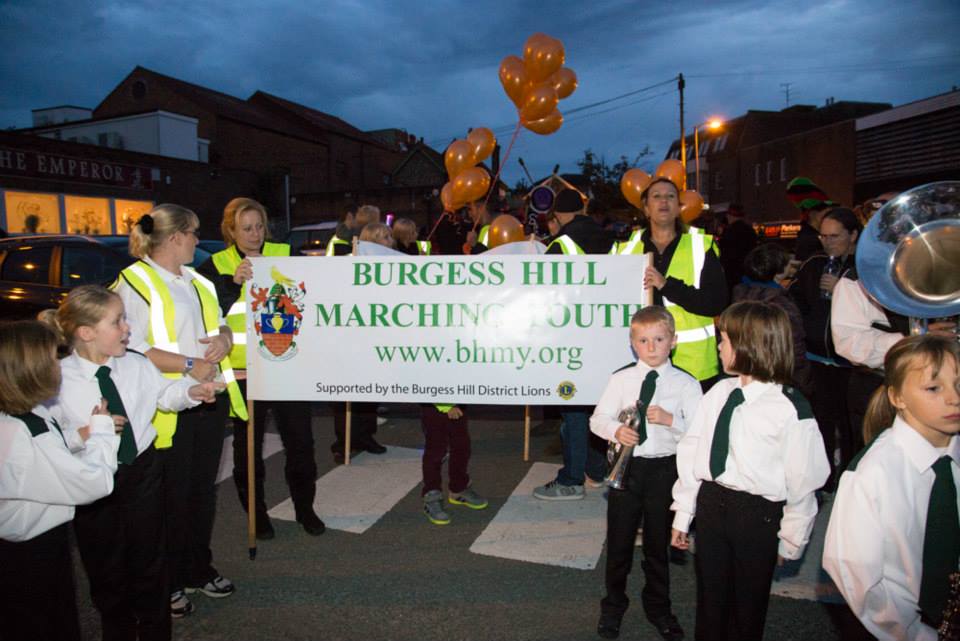 Burgess Hill Marching Youth are an extremely successful youth band, competing and performing throughout England and Europe and winning an impressive selection of titles. Over the years, members have had the opportunity to perform at a variety of venues such as the Royal Albert Hall and Wembley Arena here in England as well as performing on tour in Germany, Belgium, Holland and France. In recent years, as well as performing as a marching band, the young members have taken part in outdoor pursuit activities as part of an annual weekend camp, have performed together in concert to raise funds and performed as part of the National Massed Bugle Band.

Each year, the members work very hard to put together a routine of traditional military band and contemporary music, these also include special pieces for tuned percussion and drum displays to entertain the public at various events and contests. Through this, members learn skills in music, drill, social skills, teamwork and self discipline, all valuable life skills. The band actively raises funds to continue by performing at festivals and parades and is predominantly self funded. However, BHMY is extremely fortunate to have the support of the Burgess Hill District Lions which has helped greatly in the band’s quest for new equipment.

Over the last few years the band has worked hard to introduce a full brass section to work alongside the original bugles and percussion. We aim to teach the members to read music and to introduce a wide repertoire. This change to full instrumentation has allowed the band to increase the performance opportunities to include concerts and seasonal performances such as caroling.

Hundreds of young people from the Burgess Hill area and beyond have passed through the band, many of whom state that their band years were the best years of their lives. Some members of the current band are the sons and daughters of ex BHMY members with more children slowly growing old enough to one day follow in their parents or siblings footsteps.